When AGAITAS first started in 2012 our goals were to (1) provide camps for kids that might not be able to afford to go other camps and (2) share Christ through sports. As our camps have grown in numbers and popularity, it has become evident that we have strayed a little from this mission (a challenge that we are blessed and happy to accommodate).  At a board meeting this past winter, we began discussing why we started AGAITAS and felt a prompting that we knew we must act on. This prompting led to our first ever “camp on the go” as AGATIAS partnered with Leesburg Grace Church to host a free soccer camp at Whispering Pines Mobile Home Park. 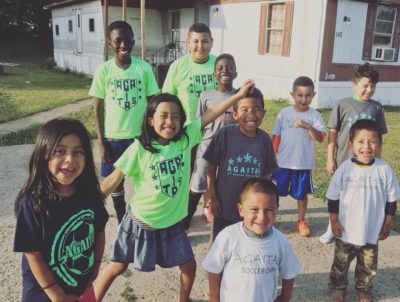 What we found by stepping into this prompting was a group of approximately 25 kids who were joyful, kind and very excited to play soccer. While the campers learned about soccer, they also learned several Bible stories. In addition, they were shown Christ’s love through the counselors and volunteers from this week. And while our counselors and volunteers set off to complete a mission, we found that once again, it was our hearts that were encouraged by the hearts of these children.

An encouraging story from the week relates back to the 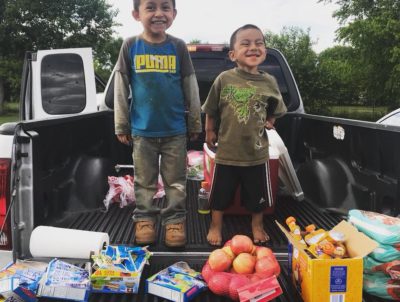 founding truth of AGAITAS. On Monday, we shared the story about Jesus feeding 5,000. We talked about how all the food in all of our houses couldn’t have fed all the people there to see Jesus. One little boy said, “Well that isn’t much food…,” and that broke our hearts. But while our hearts were still processing this comment, HE was stirring in someone else’s. We received a text that night that a family wanted to provide dinner for all the kids.  This family fed every camper on Tuesday night which then sent a chain reaction that we certainly did not see coming. Upon hearing this story, a second family volunteered to feed all the kids on Wednesday night, which prompted a third family on Thursday to provide approximately 40 meals for the children. God provided for HIS children and once again we were left speechless at how HE did something we hadn’t planned.

Each day, the camp grew. Each day we were asked if we could come back the next. We even had to promise we would be there next summer. We didn’t know what to expect; we just knew it was something we had to do. We left feeling so blessed by the opportunity we were given and by the children we met.