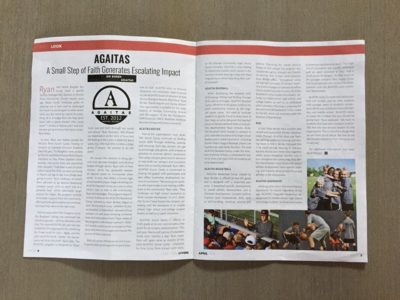 Ryan and Neena Burgher distinctly recall a specific Sunday message they received at Mission Point Community Church several years ago. Pastor Kondo Simfukwe spoke on stepping out in faith and he challenged the church to avoid regret. In other words, when you feel called by God to do something, do it. A nudge from the Holy Spirit laced with a sports theme? Who could resist? “I turned to Neena and I said that we were going to host a free soccer camp,” Ryan relays. 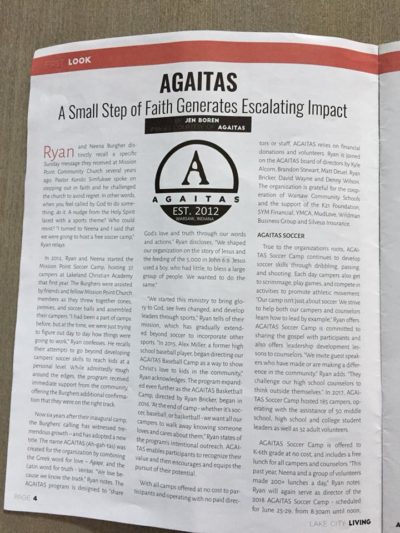 that first year. The Burghers were assisted by friends and fellow Mission Point Church members as they threw together cones, pennies, and soccer balls and assembled their campers. “I had been a part of camps before, but at the time, we were just trying to figure out day to day how things were going to work,” Ryan confesses. He recalls their attempts to go beyond developing campers’ soccer skills to reach kids at a personal level. While admittedly rough around the edges, the program received immediate support from the community, offering the Burghers additional confirmation that they were on the right track.

Now six years after their inaugural camp, the Burghers’ calling has witnessed tremendous growth – and has adopted a new title. The name AGAITAS (Ah-gah-tas) was created for the organization by combining the Greek word for love – Agape, and the Latin word for truth – Veritas. “We love because we know the truth,” Ryan notes. The AGAITAS program is designed to “share God’s love and truth through our words and actions.” Ryan discloses, “We shaped our organization on the story of Jesus and the feeding of the 5,000 in John 6:9. Jesus used a boy, who had little, to bless a large group of people. We wanted to do the same.”

“We started this ministry to bring glory to God, see lives changed, and develop leaders through sports,” Ryan tells of their mission, which has gradually extended beyond soccer to incorporate other sports. “In 2015, Alex Miller, a former high school baseball player, began directing our AGAITAS Baseball Camp as a way to show Christ’s love to kids in the community,” Ryan acknowledges. The program expanded even further as the AGAITAS Basketball Camp, directed by Ryan Bricker, began in 2016. “At the end of camp – whether it’s soccer, baseball, or basketball – we want all our campers to walk away knowing someone loves and cares about them,” Ryan states of the program’s intentional outreach. AGAITAS enables participants to recognize their value and then encourages and equips the pursuit of their potential.

With all camps offered at no cost to participants and operating with no paid directors or staff, AGAITAS relies on financial donations and volunteers. Ryan is joined on the AGAITAS board of directors by Kyle Alcorn, Brandon Stewart, Matt Deuel, Ryan Bricker, David Wayne and Denny Wilson. The organization is grateful for the cooperation of Warsaw Community Schools and the support of the K21 Foundation, SYM Financial, YMCA, MudLove, Wildman Business Group and Silveus Insurance. 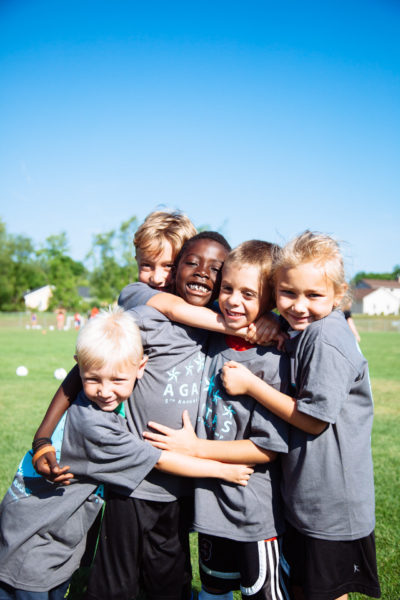 AGAITAS Soccer
True to the organization’s roots, AGAITAS Soccer Camp continues to develop soccer skills through dribbling, passing, and shooting. Each day campers also get to scrimmage, play games, and compete in activities to promote athletic movement. “Our camp isn’t just about soccer. We strive to help both our campers and counselors learn how to lead by example,” Ryan offers. AGAITAS Soccer Camp is committed to sharing the gospel with participants and also offers leadership development lessons to counselors. “We invite guest speakers who have made or are making a difference in the community.” Ryan adds. “They challenge our high school counselors to think outside themselves.” In 2017, AGAITAS Soccer Camp hosted 185 campers, operating with the assistance of 50 middle school, high school and college student leaders as well as 32 adult volunteers.

AGAITAS Soccer Camp is offered to K-6th grade at no cost, and includes a free lunch for all campers and counselors. “This past year, Neena and a group of volunteers made 200+ lunches a day,” Ryan notes. Ryan will again serve as director of the 2018 AGAITAS Soccer Camp – scheduled for June 25-29, from 8:30am until noon, at the Warsaw Community High School Soccer Complex. AGAITAS is also looking to implement mobile soccer camps in the summer of 2018, keeping in step with their original vision while expanding their overall outreach. 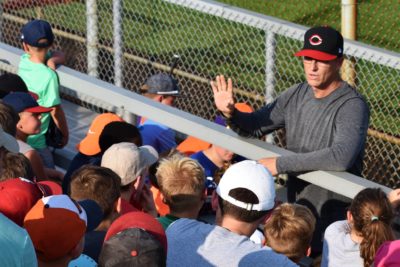 AGAITAS Baseball
While developing the essential skills of throwing, hitting and fielding through drills and scrimmages, AGAITAS Baseball Camp, offered to K-6th grade, holds to the same overarching mission as the original soccer camp. “We want to motivate students to glorify Christ in every facet of their lives, so we’ve designed the baseball camp to incorporate both biblical and athletic development,” Ryan remarks. AGAITAS Baseball Camp hosted 72 campers in 2017, with the assistance of six high school leaders and 21 adult volunteers – including former Major League Baseball players Lee Guetterman and Wade Rowdon. The 2018 AGAITAS Baseball Camp, under the direction of Denny Wilson, is scheduled for July 16-19, from 5:30-7pm, with the location yet to be determined. 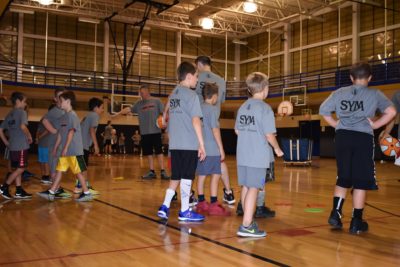 purpose: 1) basketball-specific development, 2) overall athletic development, and 3) character development. Campers work to improve upon fundamental skills, such as ball-handling, shooting, passing and defense. Promoting the overall physical fitness of each camper, the program also incorporates agility, strength and flexibility training. And, of their third objective, Ryan Bricker offers, “Throughout

camp, we highlight principles of servant leadership and encourage our campers to reflect Christ’s perfect example.” In 2017, AGAITAS Basketball Camp hosted 118 campers, utilizing 29 middle school, high school, and college leaders as well as 29 additional adult volunteers. Planning is underway for the 2018 AGAITAS Basketball Camp, slated for the fall, which will continue under the direction of Ryan Bricker.

RISE
In 2017, Ryan Bricker took another step of faith and started RISE Athletic Development. Through AGAITAS, Ryan saw families wanting additional training and driving hours to find it. Bricker believed that if he could provide training in Warsaw, families would have more time together, which would strengthen families and in turn strengthen the community. Rise Athletic Development exists to provide overall athletic development, sport-specific training, and character development for young athletes in the Warsaw area.

AGAITAS Leadership
Holding to the notion that we all have an opportunity for impact, regardless of our age,

AGAITAS integrates leadership development for middle school, high school and college students – a crucial component to meeting organizational goals. “Our high school counselors are usually partnered with an adult volunteer to help lead a small group of campers. As they invest in the younger campers, they inspire those kids to pursue their own leadership development—and the AGAITAS cycle continues,” Ryan reveals. 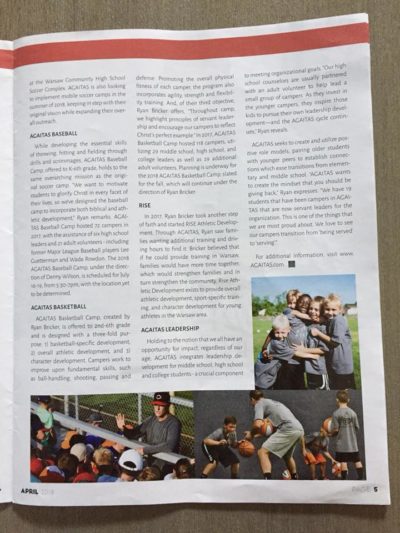 AGAITAS seeks to create and utilize positive role models, pairing older students with younger peers to establish connections which ease transitions from elementary and middle school. “AGAITAS wants to create the mindset that you should be giving back,” Ryan expresses. “We have 19 students that have been campers in AGAITAS that are now servant leaders for the organization. This is one of the things that we are most proud about. We love to see our campers transition from ‘being served’ to ‘serving’.”