The Goal is ‘Yes’

IT COULD HAVE BEEN A SUNDAY MORNING LIKE ANY OTHER.

But that day in the spring of 2012 turned out to be the day when Ryan (BS 07, MAIR 12) and Neena (Kishan BS 09) Burgher decided to follow God’s calling, not with a step but with a flying leap.

Their pastor, Kondo Simfukwe (BA 00, MDiv 04), was preaching on the importance of following God’s calling. He cautioned against the regret of looking back and wondering what might have happened. If God was telling you to do something, he said, you should do it.

“I looked at Neena that day,” Ryan remembers, “and said, ‘We’re going to do a free soccer camp.’”

It was an idea that had been hovering in his head for some time. A lifelong soccer player as well as a native of Warsaw, Indiana, Ryan had a passion not only for the sport but also for the community. Since his conversion during his time at Grace College & Seminary, he also had a passion for impacting others for Christ. For some time, the soccer camp had occupied his imagination as a way to bring those passions together.

Though he knew soccer quite well, and had even spent five years coaching the women’s soccer team at Huntington University, Ryan had no experience starting or running a camp. Nevertheless, Ryan and Neena, stirred by their pastor’s message, were determined not to look back with regrets. Ryan recalls that they looked at each other and shared an instant resolve: “We just said ‘yes.’”

Ryan had experienced firsthand the way sports can open the door to spiritual connections. He had enrolled at Grace as a nonbeliever, with the sole purpose of playing soccer — growing his walk with God had nothing to do with it.

“I was not the poster child for Grace College,” he admits with a laugh. “But soccer gave people opportunities to pour into my life, where it wouldn’t have been a conversation I might have had before. Playing soccer at Grace was how I found faith.”

As his college career progressed, Ryan was discipled by a group of strong believers — especially Ryan Rollefson (BS 02) — some of whom he joined on missions trips to Jamaica and Japan. On both trips, he saw how soccer could be used to share Christ with people. “Wherever you’re at on your spiritual walk, when you throw a soccer ball out, it doesn’t matter at that point.”

Those experiences were foremost in his mind when he envisioned the soccer camp he wanted to start in Warsaw.

“We were thinking about Jesus’ story of the woman at the well. She was at that well for water — that’s all she wanted — and Jesus gave her so much more. We look at the sport as the well. People are coming to our camps looking for sports, but we want to give them so much more when they get there; that’s the ultimate goal.” 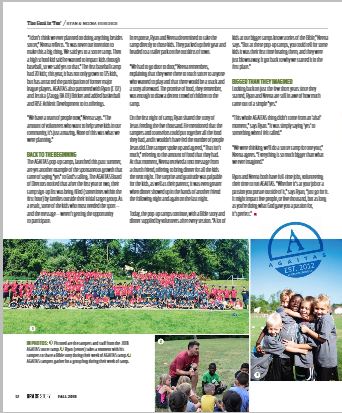 Two months after that Sunday morning in April, Ryan and Neena hosted their first camp. They called their organization AGAITAS, a combination of the Greek word for love (agape) and the Latin word for truth (veritas). Their goal was simple — to provide a free summertime activity for local kids who couldn’t afford to go to any other camp, and use that as a venue for sharing the Gospel.

The first camp hosted 37 kids — a respectable number, by any measure. Fast forward just six years, and AGAITAS soccer camp is now serving 250 players from kindergarten through sixth grade. The organization has also branched out into multiple sports, thanks to a number of volunteers who, like Ryan and Neena, heard God’s calling and responded with a simple but immediate “yes.”

“I don’t think we ever planned on doing anything besides soccer,” Neena reflects. “It was never our intention to make this a big thing. We said yes to a soccer camp. Then a high school kid said he wanted to impact kids through baseball, so we said yes to that.” The first baseball camp had 20 kids; this year, it has not only grown to 125 kids, but has attracted the participation of former major league players. AGAITAS also partnered with Ryan (C 02) and Jessica (Zaugg BA 03) Bricker and added basketball and RISE Athletic Development to its offerings.

“We have a team of people now,” Neena says. “The amount of volunteers who want to help serve kids in our community, it’s just amazing. None of this was what we were planning.”

BACK TO THE BEGINNING

The AGAITAS pop-up camps, launched this past summer, are yet another example of the spontaneous growth that came of saying “yes” to God’s calling. The AGAITAS Board of Directors noticed that after the first year or two, their camp sign-up list was being filled (sometimes within the first hour) by families outside their initial target group. As a result, some of the kids who most needed the sport — and the message — weren’t getting the opportunity to participate.

In response, Ryan and Neena determined to take the camp directly to those kids. They packed up their gear and headed to a trailer park on the outskirts of town.

“We had to go door to door,” Neena remembers, explaining that they were there to teach soccer to anyone who wanted to play and that there would be a snack and a story afterward. The promise of food, they remember, was enough to draw a decent crowd of children to the camp.

On the first night of camp, Ryan shared the story of Jesus feeding the five thousand. He mentioned that the campers and counselors could put together all the food they had, and it wouldn’t have fed the number of people Jesus did. One camper spoke up and agreed, “That isn’t much,” referring to the amount of food that they had. At that moment, Neena received a text message from a church friend, offering to bring dinner for all the kids the next night. The surprise and gratitude was palpable for the kids, as well as their parents; it was even greater when dinner showed up in the hands of another friend the following night and again on the last night.

Today, the pop-up camps continue, with a Bible story and dinner supplied by volunteers after every session. “A lot of kids at our bigger camps know stories of the Bible,” Neena says. “But at these pop-up camps, you could tell for some kids it was their first time hearing them, and they were just blown away. It got back to why we started it in the first place.”

BIGGER THAN THEY IMAGINED

Looking back on just the few short years since they started, Ryan and Neena are still in awe of how much came out of a simple “yes.”

“This whole AGAITAS thing didn’t come from an ‘aha!’ moment,” says Ryan. “It was simply saying ‘yes’ to something when I felt called.”

“We were thinking we’ll do a soccer camp for one year,” Neena agrees. “Everything is so much bigger than what we ever imagined.”

Ryan and Neena both have full-time jobs, volunteering their time to run AGAITAS. “Whether it’s at your job or a passion you pursue outside of it,” says Ryan, “just go for it. It might impact five people, or five thousand, but as long as you’re doing what God gave you a passion for, it’s perfect.”

By Bryan and Chelsea Thompson